I was recommended to this club in Bloxwich Birmingham to sort their tables out
the club is just around the corner from St johns snooker club where I had re-covered two full size snooker tables and recently went back to re-stretch them after 12 months .
Keith who had got me in at St Johns had recommended me to the Bloxwich Memorial club which is just one street away .
this is what I found on strip down 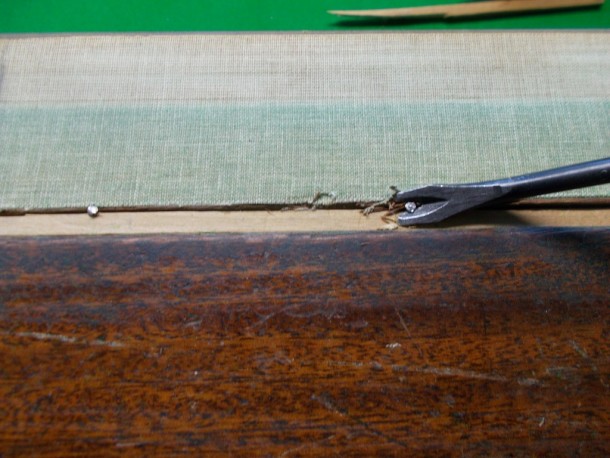 all four full size snooker tables had been bodged , the slips that retain the cloth in where too small and thin so they had nailed them in rather than make new thicker retaining slips
so with Keith helping me strip the cushions down and removing the nails which where every two inch in some cushions and 1.5 inch long
this took a huge amount of time to do and caused problems on one particular table as you will see

the cushion block where the rebated shelf is for the rubber to sit on on this table was that badly effected by nailed in slips that the block was coming off the cushion
the bounce would then be reduced as the blocks are not solid against the cushion surround that is bolted to the slate bed .
above you can see daylight through the gap in the block , I re-screwed the block back onto the cushion and this rectified the problem

all the 4 tables then where treated to a new thicker cloth retaining slip , this will hold the cloth in the cushion rebate slip slot tighter and without the need for nails to hold it in .
the piece of thin wood is called  a slip , because it is supposed to slip in and out on re-cover yet be tight enough to hold the cloth in
sometimes when you get people sitting on cushions this forces the rubber off the block and pulls the cloth out of the slip , and that is why you get irate Club owners shouting at people who sit on snooker table cushions .
as it is Costly to get a fitter back to sort this out . So do not sit on the cushions when taking shots or watching other people on the next table. 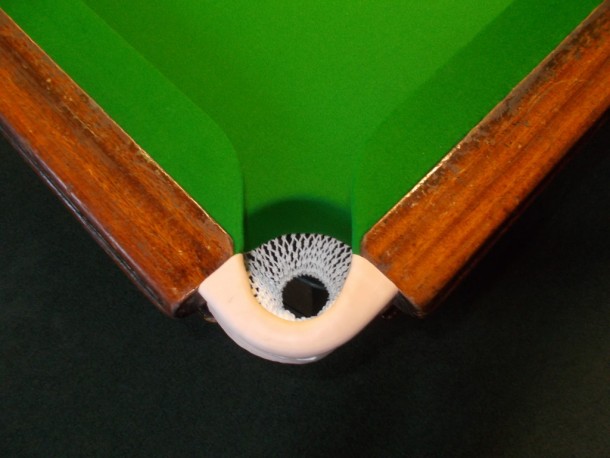 I was also fitting new nets and leathers to all 4 tables , here you see a nice tight fitting leather and those newly re-covered cushions and bed cloth.

over time chalk dust will vibrate to any impact area such as spots or especially under the end cushions
here you see compacted slate and chalk dust which sits just under the end cushion , this causes a ramp for the ball to lift as it hits the cushion , causing ball jump off the end cushions
just take some sand paper and sand this away off the slate , this is a few years worth of compacted chalk dust on these tables , which where re-covered by a Local well known firm in the Birmingham area ,
they are well known for this bodge it and scarper work , they ripped this club off big time , the bed cloths where put on very slack with a tack every foot around the outside of the bed , I put them in every 4 inch and the cloth is put on tight if I was fitting it
these cloths where then re-stretched by this Cowboy outfit some 5 weeks later at extra cost , and they just removed two cushion off the side of each table and took around 10 tacks out pulled and tacked back fitted the two cushions back and then scarpered .
A fitter like myself could spot what they had done by the bolt holes in the bed cloth , being double down one side yet still aligned on the other ends and side .
so they ripped the club off on the re-cover bodged the slips by nailing in , put slack cloths on , then 5 weeks later ripped them off again by bodging the stretching of the bed cloths .
I came across another table two days after finishing these tables that had gone through the same process by the same firm and this had substandard cloth fitted to it !
.so this is not a one off 4 tables here and one other all in the same week in two premises
this is a common practice with Cowboys like this , they will not change their ways , they are in it for a quick Buck , they do want naming and shaming but legally I can only put well known local Birmingham firm you do the detective work to work out who it is .
Any way back onto the job in hand . 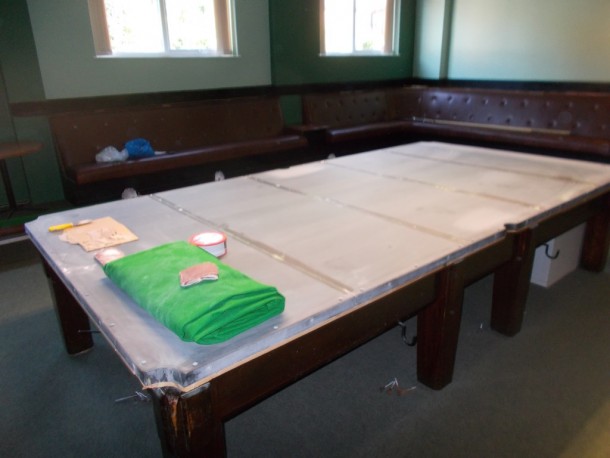 End of slate sanded to remove those compacted chalk areas , the slate joints where all filled with car body filler then sanded as one bed to give a smoother transition from one slate to the next .

The Brand of cloth used for this job was Strachan pronounced Strawn
Tournament 6811 30 oz 100% pure new wool napped cloth , this will give durability and a medium paced table
you can fit thinner cloths or even thicker cloths , the thinner a cloth and shorter the nap the speed of the cloth is greater , but it will not last long
Thick cloths will last long but are very slow , this sits between the middle grade and the fast grade of cloths , there is also a 29 oz version that we use now and again if the club is not used much , but this club is used very often hence the 30 oz used .

the first table completed looking splendid in it’s Strachan Tournament cloth with new nets and leathers fitted , a Burroughs and watts rigidus framed table , *note the middle legs being close together and  off set spacing , this is because the under slate bearers are right on the slate joints rather than twin or single central slate bearers on a standard table . 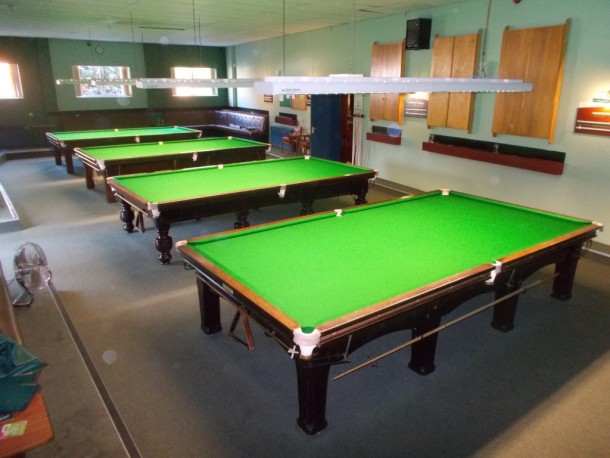 all four tables now completed and ready for the coming season , all have new cloth and new nets and leathers
the tables are vintage manufactured the first square legged table is a Riley , the second large turned legged table is an Orme & Sons , the last two tables are Burroughs and watts Rigidus framed tables , none had name plates on , but as a fitter who has been working on these types of tables for over 40 years you get to know the makes and models of Snooker tables .
the cushions have been sorted out with new cushion cloth slips fitted making future work very easy to do unless you let the cowboys back in !
The bed cloths are fitted tightly and should be ready for a re-stretch half way through the cloths life around 9 to 12 months time
I would like to thank Keith who helped me for the three days I was at the Bloxwich Memorial club and the committee for having the good foresight to get someone in who could rectify the faults they experienced with the Local Birmingham firm who fitted the cloths before .
Stick with Geoff at GCL billiards and you can rest in the knowledge that your tables will be maintained correctly .